Chill, it's just my opinion
Random thoughts and opinions that pop into my head

How I played chicken with a squirrel — and lost

The saga of Jeffery the Squirrel: 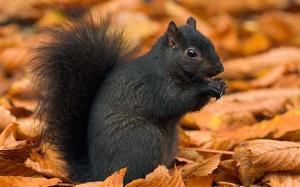 He may look cute and innocent but don’t be fooled!

Saga may be a strong word for this tale but I wanted to give the proper dramatic weight that the situation required. Two mornings in a row a black fluffy squirrel has decided that my house is the perfect winter getaway spot for him, and possibly his small squirrel family. This is our story.

It all started the other day when my boyfriend was about to leave for work. He opened the door and was shocked to discover a squirrel sitting on our door step. Not on the path leading to the door, but the actual door step. We live on the main floor of a duplex, which is now a four-plex, and our level is lifted above the ground so the basement has windows. So not only did Jeffery scurry to our door, he hopped up the six, or so, steps, crossed the mini porch and sat inches from the door. Thankfully we have a screen door or he probably would have scampered right inside and made himself at home!

I was a little scared by him as I have had some dicey encounters with squirrels in the past. When I was younger my sister tried shaking a birch tree so that a squirrel would fall on me. Luckily no one, squirrel included, was injured during this stunt. Also, while working at a golf course, my cart was attacked by a gang of overly bold, fluffy tailed rodents. So needless to say I am not a fan of these creatures.

The second day it was my turn to open the door to discover Jeffery sitting at the door staring at me with his evil, beady, little eyes. I’m not proud to admit it, but I acted very much like the girl I am, and squealed. How was I supposed to get to work with this black beast blocking my way?! I couldn’t even open the screen door he was so close. We proceeded to both stare the other down. Hoping the opponent would cave and retreat. I mustered up my courage and figured if I opened the door he would run away. I took a deep breath and as I reached for the handle he charged! I ran back into the house.

And that is how I played chicken with a squirrel and sadly was defeated.

I still see Jeffery around the property and I see the mocking in his eyes. I was shamefully defeated. By a squirrel.

You are an adult, use your words! 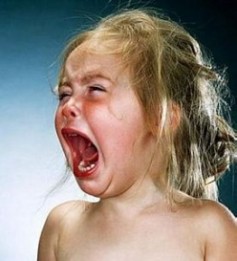 Last I checked, it was not socially acceptable to throw a temper tantrum to get your way when you are 3, let alone 53. For some reason, apparently, not everyone knows this little tidbit of social etiquette.  I thought that once people reach adulthood they would have learnt various negotiation techniques that were slightly more sophisticated than those of a toddler; I was wrong. Much too often have I had to deal with full grown adults throwing tantrums. Throwing a tantrum does nothing when you are 3 and it does less when you are 53. All you really accomplish is having people judge you and assume you are slightly unbalanced.

Almost all of the jobs I have had have been in customer service of some kind, so as you can imagine I work with people a lot. With me, if you come at me angry from the start, and start yelling at me, I am going to do as little as possible to help you. Obviously, in order to keep my job, there is a minimum requirement that I have to do to at least appear to help you, but that minimum is all you will get if you yell instead of using your big kid words. If you came up and calmly and sincerely stated your issue I am going to go out of my way to help you as best I can because I like to see people happy.

A woman came into my job once and started yelling at everyone about an issue she believed existed. Various people tried to explain that there was not an issue with the product but she wouldn’t listen and just kept yelling. People stared. It was awkward. We referred to her as “The crazy woman”. That is what you get when you throw tantrums in public. You get called names; not unjustly I might add. I don’t understand the theory behind it. Just because something happened that you were unhappy with does not mean you have the right to go yelling at anyone who will, or has been forced to, listen. As I said before, state your problem calmly and people are much more willing to help you. No one is going to go the extra mile to help someone who belittled them. Well, I’m not anyway.

A manager of mine once showed me this video, Give em the Pickle. While I understand and agree with the message (if you can make someone’s experience better by just doing a bit extra, do it) what I kept thinking when I watched it was “what kind of person writes to the owner of a restaurant about a $0.75 misunderstanding over pickles?!” It is ridiculous how many people complain about little things to get free stuff or in the hope of getting free stuff. It is never the calm, sincere people that get it either. It is the loud, angry people that assume they deserve something even if they don’t. I don’t even know why it bugged me so much but it really did. It was $0.75! The man should have just explained that he normally isn’t charged and I’m sure the manager would have come over and it would have been straightened out. But no, he wrote to the owner, probably because he figured it would get a better deal going straight to the struggling entrepreneur. Maybe they had to change the policy on free pickles because it became too much of an expense. You don’t know the back story, Pickle-man! You could have inquired as to why the change in policy instead of whining about it. I think the phrase “The customer is always right” has gone to too many people’s heads. The girl at the retail store isn’t the bad guy for not allowing you to return your shirt 2 months after the return period ended. You are, for not making it a priority. Policies are generally put in place for a reason. Don’t yell at your server or retail person. They are just doing their job. If you show people respect they are much more likely to return it.

That is the end of my rant.

So I am excited to say that I finally had a reader comment on my blog! This probably seems like nothing too exciting to most people but I was so happy to see it. I figured that I should commemorate this by posting a new post. Getting a comment may be a small accomplishment, but it is an accomplishment none the less. It means that someone is actually reading this thing. I always get excited to see a new follower but there is something about a comment that is bigger. To me, it shows that people are not just following me because they are a serial follower or because they accidently hit the follow button. Someone is actually reading what I write and taking that minute out of their day to show me they read it by commenting. It’s a nice feeling.

So, if you are reading my blog and have a comment or just want to say hi, please do! It really does make my day.

If you are a follower of my blog you may have noticed that September did not have many new posts. Maybe one. Basically I was bad and kept putting it off. In my defense, September was a huge transition month for me. Not only did I start a new job but I moved, which is a process that takes quite some time. Not only do you have to move everything you have but you also have to unpack and settle in. Not to mention all the Ikea trips required to complete the settling in. The good news is that I think I am ready to get back into regular posting again. Hopefully at least once a week. No promises, but I’ll try!

Posted by lizbethmarie in Uncategorized